It has been a little less than a week since I returned from my excursion to the North East. I spent a little more than a week there and already it seems like it was so long ago. I left July 24, Pioneer Day here in Utah, and so I missed the fireworks but family is more important. Although family and fireworks together, that is even better. And I returned Aug 1st.

I spent a good chunk of my time with my sister in Portland, ME and almost a whole day with my Grandmother who is visiting up in ME. I think I spent the most time with my younger brother. We drove to Laconia, NH on the 26h and returned on the 29th. On are way back to Lewiston we had dinner with my older sister and the Sebago Brewing Company which was quite nice. Then on my last full day in ME I spent the day with my Mom and younger sister, which was also good.

Then on my last day I got to finally spend some real time with my older sister. I don't remember the name of the island, but we drove out to it and walked around the edge and spent at least an hour making fairy houses. Yes that's right, fairy houses. There were quite a few impressive ones already there and hundreds of other ones, but we added ours just the same. I would certainly have some pictures to post but I never got them from my sister.

In any case, I did quite a lot of driving over the week I was in Maine. And because my Brother, Sister and Mother all have stick-shifts, I got to get some practice in. My truck is an automatic, my Dad's vehichle is also an automatic, but since most of the rest of my family drive manual it is nice that I can still do it and only stall a little tiny bit.

Back to my main point, I spent probably at 10 hours behind the wheel of a manual and maybe closer to 12. I really didn't keep a precise log. I sampled three different vehichles, although mainly just my sister's and my brother's. I think I drove less than 30 minutes in my Mom's car. My brothers was the most interesting to drive as it had a clutch that you really had to push and manual steering so it was almost a work out. I'm sure if I drove it for any length of time the muscles in my left leg would start bulking up. And again my point in all of this is when I got back to Utah I discovered I had Phantom Clutch Syndrome!

Yes, Phantom Clutch Syndrome, or PCS is much like Phantom Limb Syndrome. It feels like you still have a limb when it is actually gone, it has been amputated. I first experienced PCS when I got into my Dad's vehichle the MMV. I put my foot down to engage the clutch and nothing was there! It really isn't as exciting as my narrative suggests. When my foot reached for nothing my brain clicked and switched back over into automatic driving mode.

I guess what was surprising that I had gotten used to expecting a clutch. What was even more surprising was for the next few times I started driving my foot still looked for the clutch. I'm pretty much over it though. I've reverted to my lazy left leg ways but I'm sure the next time I visit my family I'll get to do it all over again.

So some of you might be wondering, why if I spent a whole week visiting my family in ME that I spent the majority of it writing about PCS. I mean surely I had some great times with my siblings, relatives and Mom. And I did, but I wouldn't feel right just going into great depth about them and just giving a bare factual account doesn't seem quite right either.

I mean yes, I went with my sister and my mom to Taber's golf course and after that we got ice cream at Dairy Joy. My sister and I both got black raspberry and vanilla chocolate dipped cones and my mom got a parfait and after that we went to see Monster House at flagship cinema's and then spent an hour at Good Will buying some clothes, a suitcase and a Twin Brownie camera before going to a movie liquidation store and buying some movies. Then of course we all met up at Margarita's, a mexican restaurant across from the Lewiston Mall and had dinner. And that isn't bad description but it isn't great either. It means something to me because I can remember all the things I haven't said but it seems to be pretty much empty facts to anyone who wasn't there.
Posted by David Horne at 10:49 PM No comments: 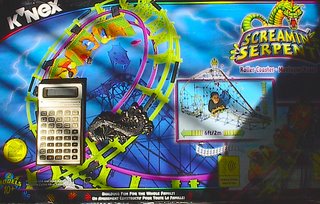 Yay, I just got Christmas presents! I'm not sure what is from who because they weren't really labeled. But I think they are both from my brother and sister and thats the best part of all knowing that they were thinking of me.

I know the Screamin Serpent roller coaster is from Ezra and the ancient TI Business Analyst - II calculator.
There is a dragon belt buckle that was wrapped in at least 3 layers of wrapping paper, but no label.
I also got two glow in the dark horns. Which are cool because the glow in the dark. 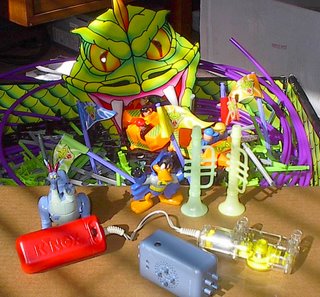 Probably the most amusing thing is the rolling Devon and Cornwall from the movie Quest for Camelot. As a way of explanation, there is stuffed animal that was passed back and forth several times that spouted out phrases, "My name is Devon his name is Cornwall" and "Let's Barbecue this buddy."
As for the Daffy Duck figurine in a duckman costume, I have no clue to its significance.
Anyway I'm really glad to finally have my Christmas presents and now I can look forward to what I might be getting next year! Or I can just build a super roller coaster, if I ever manage to find any time.
Posted by David Horne at 11:08 AM No comments: